With sadness WRAS learnt of the death of Laurie Young on 8th December 2015. With Graham Mays, Laurie wrote the WRAS Water Regulations Guide which has been of such importance and value to water inspectors and installers and users of plumbing systems in the UK by defining and explaining the requirements of the Water Fittings Regulations and Scottish Byelaws.

Trained as an engineer, Laurie became head of water supply, sewerage, and sewage treatment at the Government’s Property Services Agency (PSA), with responsibility for its many public buildings, military installations, housing (including definitive work on water supply to tall apartment blocks), and hospitals.  A key role of PSA was to develop specifications for water supply in buildings and Laurie served on several British Standards Institute (BSI) committees including water supply (B504), giving advice on technical and legal topics and representing the public interest. 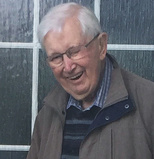 Following early retirement from PSA, Laurie was engaged as a consultant to the Drinking Water Inspectorate (DWI) which provided technical input to the Water Division of the Department of the Environment (later, Defra).  When plans were abandoned to revise BS6700 as an Approved Document, Laurie undertook the drafting of Government Guidance to the Water Fittings Regulations, founded on the Water Byelaws Guide and the best of world practice, especially for backflow. The Guidance was developed in as collaborative a way as possible, through the Water Industry Committee for Installation Controls (WICIC), WRAS and the Government’s Water Regulations Advisory Committee (WRAC).

It was very soon realised that the Guidance itself needed a further layer of explanation to clarify details. So Laurie and Graham Mays developed ‘Recommendations’ for complying with the Regulations, and in consultation with the UK water suppliers, they wrote the WRAS Water Regulations Guide. With over 83,000 copies sold since 2001 and surely a technical best seller, the Guide has been a tidier solution than all other options and stands as a testament to its authors’ knowledge and understanding of this complex technical subject - for which we must thank Laurie and Graham.