A Severn Trent Water customer phoned in complaining that his drinking water was bright blue. The consumer – who was at the time undergoing chemotherapy – had been doing some DIY plumbing work and drained down his system inside the house.

This coincided with the appearance of blue water from his kitchen tap. But this was no coincidence.
A Water Fittings Inspector called around to the customer’s house – an 80’s two-bedroom terraced in Nottinghamshire. It soon became apparent that the afore-mentioned DIY work – which involved the isolation of his water supply – was the cause of the Smurf-like water. 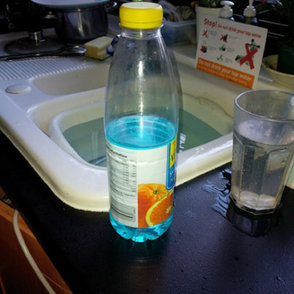 The inspector advised the customer that it was highly likely that this blue water was coming from the WC cistern. Luckily, this was quickly discernible because the customer had used a blue-coloured cistern block.

The inspector isolated the customer’s water supply with a stop tap under the kitchen sink. Next, the inspector turned on the cold taps at the kitchen sink and wash hand basin in the bathroom. Within seconds, blue water, syphoned out of the WC cistern, flowed out of the kitchen tap and in to washing up bowl. But, a low pressure situation caused by the open taps should not cause water to be sucked back into the supply – there must be another factor. Somehow, the water level was getting too close to the inlet where water comes into the cistern.

The inspector tried to adjust the float valve to lower the level of water in the cistern with no luck. The valve was faulty and would not adjust properly.

The customer was advised to replace his faulty valve and was provided with information on a suitable compliant bottom inlet float valve such as WRAS Approved, however other methods to demonstrate compliance are available.

Naturally, the customer was stunned about the incident, saying: “If I hadn’t seen this with my own eyes I wouldn’t have believed it.” Not surprising really.

But this sort of incident is not as uncommon as you might think. Over the last six months Severn Trent have investigated at least 11 incidents which have involved blue water coming from toilet cisterns – and in each case the valves have been telescopic type incorporating an AC air gap.

The message is simple – to avoid being the next blue water statistic, make sure the inlet valve in your cistern is approved, fit for purpose and properly adjusted. Next time you are having some plumbing work done, why not ask your local WaterSafe Approved Plumber to check your cistern and make sure the water in your tea doesn’t come via your WC.