Water samples were taken and the results showed the water had a low pH of 5.6 and high metals content. A do not drink notice was issued and a full water fittings inspection was undertaken by one of the company’s Water Regulations Officers. 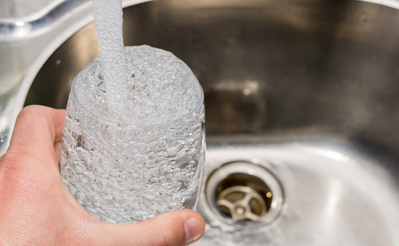 In the beer cellar were two carbonator units, both of which had labels stating that they were fitted with an “approved inline double check valve” assembly. It was suspected that the failure of either or both of them was the most likely cause.

The inspection identified a number of contraventions throughout the building and enforcement notices were issued, to bring the building back into compliance.

The failure of the double check valves, fitted within the soft drinks carbonator units, had allowed the water supply in the nightclub to become carbonated. It is likely that this occurred through a combination of backflow and from the pressurised nature of carbonation process. The carbon dioxide had reacted with the copper pipe work in beer cellar giving rise to the ‘funny taste’ reported, the change in water chemistry and blue frothy/bubbly water experienced at various outlets within the premises. Instances of blue water are often associated with copper pipes.

The industry and plumbers place a great deal of faith in double-check valves. Since most check valves cannot be tested to verify they are working, a failure only becomes apparent by some form of contamination. A check valve should never be fit and forget, as a mechanical device there will be wear and tear overtime and this will create the potential for it to fail. Check valves should be regularly replaced and be suitable for the type of installation where they will be fitted. BS EN 806-5:2012 recommends replacing check valves at least every ten years.

Be careful when selecting backflow prevention devices or other water fittings when carbon dioxide is in use – make sure they are suitable for use with carbon dioxide.

Carbon dioxide dissolves in water, forming carbonic acid and in the process lowering the water’s pH level. This increases the solubility of copper (or deposits lining the pipe – oxides and salts etc.) in contact with the water (cuprosolvency). This means the copper – whether pure or found in alloys (such as brass or gunmetal) will be released into the water, causing high levels of it to be detected.

Carbon dioxide in water does not only affect copper - other metals including zinc, nickel, and lead can also become soluble when in contact with water containing carbonic acid, causing high levels of the metal to be detected in the water which could lead to a water quality failure.