Help my water tastes of sulphur…

July 2018 was one of those glorious summers, with temperatures in the upper 20’s. You would expect living in a lovely historic cathedral city on the banks of a river, that life couldn’t be better. However, for a few residents, in Diglis, Worcester, became concerned that when they noticed an off smell and taste to their water and turned to their water company, Severn Trent for help. In response to reports that it smelled of and tasted of sulphur, Severn Trent immediately issued a ‘Do Not Drink’ notice to affected consumers whilst they dispatched a team to investigate. 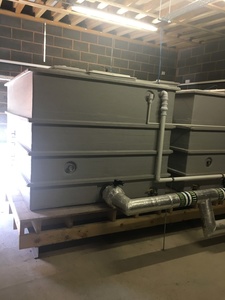 Network staff checked the mains system and could find nothing untoward, which led the company’s Public Health and Standards team to send Water Fittings specialist to look more closely at the property and it’s plumbing. Having made contact with the caretaker responsible for the site it became apparent that the affected property was one of four apartment blocks, which were all served by a pair of cold water storage cisterns. A quick look in the plant room found it emitting a strong solvent smell, which was identified to be coming from one of the storage cisterns. During the investigation, the caretaker stated that only a few days earlier contractors had been undertaking repair work to the storage cistern.

Concerned about safeguarding public health Severn Trent immediately extended the “do not drink” to cover all 82 apartments fed directly from the two internal cold water storage cisterns, as an interim measure whilst the root cause of the contamination incident was investigated. The initial inspection revealed staining on the external floor, adjacent the storage cistern indicating the cistern had been leaking for some time. Inspecting the inside of the storage cistern, it was clear the cistern had been recently coated in an epoxy resin compound as a foot print was still visible in the bottom of the cistern. The storage cistern was immediately isolated by the Water Fittings Inspectors and taken out of service to prevent any further contaminated fluid being circulated around the private plumbing system. 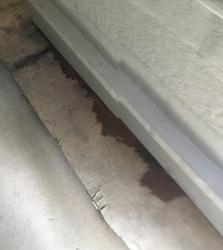 Due to the public health risk, the ‘Do Not Drink’ notices remained in force for over a week while the issue was rectified by the developer. Once the rectification works were completed and a replacement storage cistern installed, further water quality samples were undertaken to confirm the water was ‘wholesome’ and fit to drink. 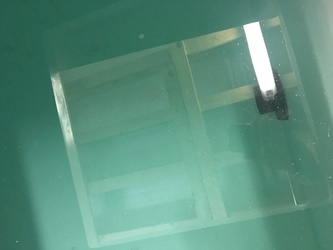 Having questioned the contractor - responsible for the works, under caution, the epoxy coating used initially appeared to have WRAS approval, but it then became apparent upon reviewing the evidence that the WRAS approved material was also mixed with other non-approved compounds, suspected to be accelerator solvents which deemed the WRAS approval was invalid. It was also clear that insufficient time was allowed during the repair to fully allow the curing process – used to coat the inside of the storage cistern – to take affect before refilling and putting the storage cistern back into service.

Severn Trent took enforcement action which included prosecuting the company who carried out the work. On 1st March 2019, Purewater Environmental Services Ltd entered a ‘guilty’ plea for the offence of conducting work on a water fitting in an unworkmanlike manner, which led to the contamination of the public drinking water supply.

Birmingham Magistrates Court found the company guilty and they were fined £5,776.93 for those offences committed.

Severn Trent’s Senior Water Fittings Technician Lee Rawlings said “We treat all water quality matters very seriously and we hope this case goes to show just how important it is for companies and individuals who install, repair and maintain plumbing systems that they have a legal responsibility to comply with Water Fitting Regulations. This case is a prime example of poor workmanship which resulted in a significant contamination of a plumbing system. It’s absolutely vital that we take this sort of legal action to protect water supplies for our customers, as well as recovering costs that, otherwise, our customers would have to bear.”