Strawberries are one of the nice things about summer – but pink water from the kitchen tap! In the summer of 2017, this was the case for residents in Newent, Gloucestershire when they contacted Severn Trent regarding the colour of their drinking water. Residents were reporting that their mains water supply was running ‘pink’ from their kitchen taps. 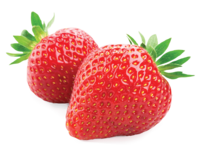 Severn Trent’s immediate response was to undertake rigorous water quality sampling upstream and downstream of the affected properties and to issue ‘do not drink’ notices. This ensured Severn Trent safeguarded public health whilst trying to establish the root cause of the contamination incident and guarantee the safe return of the public water supply.

Knowledge and experience has taught the Severn Trent water fittings regulations team, that when faced with contamination incidents of this nature, the root cause is normally associated to backflow. Backflow is when fluids flow in a reverse direction which can be caused by back siphonage or back pressure. Back siphonage is associated with a reduction in the supply pressure (such as when a main bursts); and back pressure is caused when the downstream pressure is raised above the incoming supply. In both cases it can result in contaminated fluid being drawn back into the cold water supply.

That afternoon, during the initial investigation, the Severn Trent inspector identified a number of greenhouses located behind one of the affected properties. 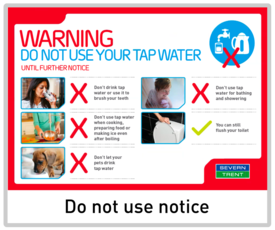 Listening to their detective instincts they investigated further. The inspector’s local knowledge quickly established that the site in question also had access to its own private borehole supply, used predominantly for irrigating crops.

A subsequent water fittings regulations inspection of the sites plumbing system revealed the site had an underground submersible pump, pumping borehole water into two large interlinked cold water storage cisterns. The stored water was then boosted by pumps running at high pressure (6 bar) to feed four inline chemical mixing units. The mixing equipment was used to collect and mix a small volume of concentrated ‘pink’ strawberry fertiliser. The fluid was then distributed under pressure to a number of standpipes located at various points around the site.

The plumbing arrangement to this point all seemed satisfactory until suspicions were raised by a yellow ‘commercial’ hose installed in one of the external greenhouses. This was traced back to its point of connection, a vertical standpipe arrangement. Further questioning established the yellow hose and adjoining underground pipework had been installed which allowed them to directly cross connect the private irrigation system to the incoming Severn Trent public drinking water supply. After these suspicions were confirmed, the inspector immediately instructed the site operator to disconnect the cross-connection pipework. 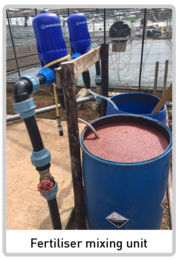 At this point, there was substantial evidence that indicated the cross connection was directly linked to contaminated fluid found in the public drinking water network. Following an interview under caution, Severn Trent concluded the private pump set arrangement was operating at a greater pressure than the public water supply, therefore the increase in back pressure resulted in strawberry fertiliser being pumped back into the public drinking water network turning it ‘pink’.

Due to the serious nature of the incident, Severn Trent had no alternative but to take legal action against the site operator for gross misconduct. The case was heard on 18 December 2017. Haygrove Ltd based in Ledbury, Herefordshire pleaded guilty at Hereford Magistrates Court under sections 73 & 174 of the Water Industry Act, for contraventions of the Water Supply (Water Fittings) Regulations 1999 - which ultimately led to a contamination incident in the village of Newent, Gloucestershire in June 2017. As a result of Severn Trent’s prosecution case, Haygrove Ltd were ordered to pay £11,707.78, including costs. 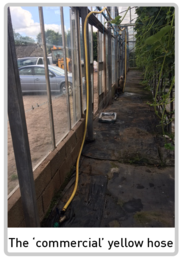 Dan Littlewood, senior Water Fittings Technician at Severn Trent, said: "It’s vital that companies and individuals understand that if they want to change their private pipework that’s connected to our network, that it’s a legal obligation to notify Severn Trent.By doing that, we can be sure the connections are safe, and the pipework is not in breach of any regulations.”

What this case study highlights is that these situations can be avoided. Any company planning to make any changes to its plumbing system must let their local water company know about their plans in advance – it is their legal obligation to do so. To notify your local water company you can find their contact details using the ‘Water Company contact’ page (click here) on the WRAS website.

Further details on Notification can be found in the WRAS leaflet – ‘Information on notification of proposed plumbing work’ also available on the on the WRAS website (click to download).