No one wants to have contaminated drinking water. But it can and does happen, particularly if pipes in the home carrying reused water look the same as those carrying drinking water. The way to distinguish them is to ensure the proper labelling is used.

In one water company-reported case, a rainwater harvesting system in an East Anglian eco-home allowed contaminated rainwater into the home’s drinking water system. The cause? A pipework cross-connection. In other cases,untreated borehole water and even sewage effluent has entered drinking water systems due to accidental cross-connections. These could have been avoided if the systems had been properly marked and been installed properly.

British Standard BS 1710, published in 1984, provided the cornerstone in the identification of building services however it hasn’t kept pace with the range of alternative water supplies now being used. With an increasing interest in water conservation and efficiency, many homeowners and businesses are turning to alternative sources in situations where water is not required to be wholesome. The result is rainwater harvesting systems are becoming more common. With this in mind, it is vital water-conveying pipes and systems are instantly recognisable to avoid cross-connections between wholesome and alternative sources of water. 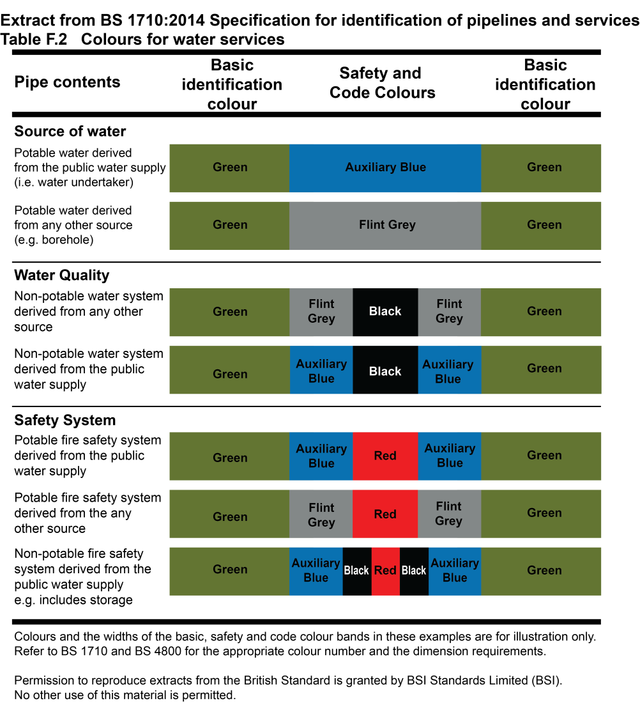 In December 2014, a revised marking standard was published in which the major revision was the colour options for water services.

The new standard uses a simpler system of colours and information labels to identify the basic nature and quality of fluids being transported (shown below) and the applications being served.

The red centre band identifying fire safety systems has been retained but now has three size options so it can be tailored proportionally to the pipe.

At a glance you can identify:

While sourcing identification to the new colours was not readily available after the standard was published, discussions with manufacturers have resulted in more supplying to the new standard.