Why could my water taste of petrol?

Plastics materials have been one of the major innovations of the 20th century. The humble pipe is one which has benefited from innovation and provided a number of benefits including anti-corrosion properties and flexibility. These have helped enormously with ground movement stresses and soils that aggressively attack some traditional materials such as copper and iron. For underground water pipes, polyethylene (PE) is commonly used as it has good elastic properties and is resistant to corrosion. 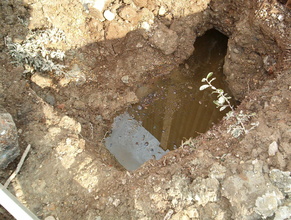 The contamination of drinking water quality at the tap by permeation of volatile organic solvents, including petrochemical products or light gases, is well documented. Once a pipe has become contaminated the water becomes unsuitable for drinking and so a “Do not drink” notice is normally issued by the water company. Boiling the water does not help, in fact it can make things worse, as it changes the compounds leached into the water – and in some cases make them harmful.

The science behind is complex and to aid understanding some elements have been simplified to explain the key processes which are taking place. The following describes the transmission processes of a chemical compound into, through and out the far side of a material. In the case of a water pipe this is through the wall and in to the water within it. 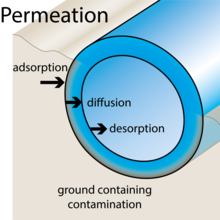 Once a compound has penetrated a pipe there is no way to remediate the pipe as the compounds become part of the structure of the plastics material and therefore replacement is the only option.

How can this be prevented?

Prevention is better than cure. Where there is a clear potential for spills, such as petrol station forecourts or where heating oils are stored, precautions need to be taken. Even a small spill can under certain circumstances can travel relatively large distances, so it makes sense that suitable resistant pipes are used as a precautionary measure in case an accidental spill should occur.

In new developments soils should be checked to make sure they have not become contaminated during previous uses. Where soils are contaminated developers will try and avoid these areas provided there is sufficient distance to re-route pipe around them. More often these potential hazards are removed, but where complete removal cannot be guaranteed a suitable pipe solution must be used. The type of contamination dictates which pipe materials may be suitable.

Ducting pipes does not always provide a solution unless the duct material itself can be properly sealed and is resistant to potential contaminating compounds.

What types of pipes are usually used?

For fuel contamination a metallic barrier is usually needed and so either a metal pipe or plastic ‘barrier pipe’ with an inbuilt metal barrier (usually aluminium) can be used. Whilst the aluminium makes the plastic material stiffer it keeps enough flexibility to provide benefits over ridged materials.

Case study 1 – relates to a petrol-powered lawnmower. It was hung up in a tool shed which happened to have an earthen floor. Nobody noticed that petrol had started to drip out of the lawnmower and leaked on to the ground where it was soaked up. Unfortunately, there was a blue plastic (MDPE) pipe underneath the shed taking drinking water to the property. The building was a meeting room for a local group and not frequently used. When they came to use it, no body had spotted there had been a problem until they tasted the water, which had a very noticeable taste and odour, indicating something was wrong.

Case study 2 – relates to a service duct. This duct was a purpose made concrete channel, which the home owner had built to make future access easy for the property’s services. They attempted to waterproof it by painting a bitumen like coating on to the inside of the duct. The property’s services were then laid within it including the plastic water pipe. Unfortunately, the plastics pipe was in contact with the coating, which allowed the solvents from the coating to penetrated the plastic pipe. The chemical compounds not only gave the water an unusual flavour but also turned it yellow. It became very clear that something was wrong.

In both of these case studies the only solution was to replace the pipes. As the surroundings were already contaminated a special barrier pipe was needed to ensure there could be no problems in future.
However, it’s not just chemical spills that should be of concern, gas supplies can also be problematical. If there is a leak and the gas comes in to contact with a water pipe it too would migrate through it and affect the water within it. Usually gas pipes are laid closer to the surface than water pipes, to prevent such problems, but this is not always the case.