It is with great sadness that we remember Dr. Steve Tuckwell, the former M.D of the Water Regulations Advisory Scheme (WRAS) who died on 31st May 2017, aged 70. Steve had stepped down from the role of M.D. in January 2012, but continued to work for WRAS in a technical advisory role. This gave Steve more time to spend with his family and to enjoy his other great passions in life, holidaying on his canal boat, gardening and music, everything from Glyndbourne to Glastonbury.

Before joining WRAS Steve had a long and successful career in the water industry. After gaining a degree in Chemistry (BSc Hons) Steve completed a PhD in Biological Sciences at Dundee University.  It was his PhD research project, combining interests in water pollution and agriculture, that first brought water to Steve’s attention. So, although his first job was in agricultural research (Harpenden and Nigeria) it was not for him and he soon found himself drawn to the water industry. Working for Anglian Water from 1975 as a water supply scientist, running a small analytical laboratory and providing advice on all scientific aspects of water supply. Before moving to Wessex Water in 1977 where for more than twenty years was involved with the treatment of water supply and sewage, water supply quality, as well as dealing with customers queries and complaints about drinking water. 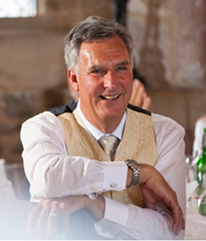 He took over management of the Water Supply Byelaws enforcement for Wessex Water in 1996 and became involved in the Water Industry’s national consultation with Government about the proposed Water Fittings Regulations. Later he coordinated the implementation of the Regulations in the Wessex Water region.

Steve became Managing Director of WRAS in June 2000, soon acquiring the well-known Regulations experts’ habit of taking the lids off WC cisterns to check on the plumbing when staying in hotels. As WRAS MD as well as managing the day-to-day business of the scheme Steve wrote articles for various journals and magazines, including Society of Public Health Engineers’ (SoPHE) newsletter, gave presentations around the UK, liaised with the UK Water Suppliers and consulted with manufacturers, trade associations and Government.

In 2015 Steve was awarded an Honorary Fellowship by SoPHE. A fellowship is the highest accolade that the Society can grant to an individual of the highest standing within industry. Steve was also a fellow of the Chartered Institution of Water and Environmental Management and the Royal Society of Chemistry.

Steve made an enormous contribution to WRAS, Water Fittings Regulation and the water industry. He will be remembered as a gentleman and for his great breadth of technical knowledge, which he was always willing to share. Steve showed great courage when diagnosed with cancer and continued to work throughout his illness. Steve's health deteriorated markedly at the beginning of March and he died in hospital as a result of a heart attack. He will be greatly missed by family, friends and colleagues.