Taste and odour complaints are not uncommon. However a farm-based incident in 2010 was one of the most unusual.

A Northern Ireland Water inspector arrived at a county Armagh farm following a complaint about the water which was coming out of the taps in an en-suite bathroom in the farmhouse. The owner assumed the cause, originated outside the boundary of his property and would therefore be the responsibility of the water company. It didn’t take long for the inspector to discover that the problems were closer to home.

An Atplas boundary box made for a promising start to the inspection. This early promise soon dwindled, however. Emerging from the boundary box, a completely exposed length of ¾” yellow rubber pipe ran up the yard into an outbuilding.

This is where a concoction of contraventions began. Inside the shed, the ¾” pipe tee’d off in three different disastrous directions. The first permanently connected to a pressure washer with no backflow protection.

The second, to an outside tap incorporating another unprotected hose union and the third into the house – via a drinking trough and bath with a completely submerged float-operated inlet valve. Top marks.

The house-bound poly pipe led the inspector to the kitchen sink where it was connected to its copper counterpart. One of the resultant branches was permanently connected to a pressurised system. The other feeding a header tank which had long since departed to be replaced by a dead leg. From here the supply went to a cold water storage tank bulging with more contraventions.

The lack of an air gap between the inlet and overflow was compounded by a build-up of algae caused by the hot and cold supplies being laid side-by-side which meant any back-syphoned water would have been excessively ‘nutritional’. Add to this the lack of a lid, supports or effective screens and a warning pipe which was neither safe or conspicuous and the picture is fairly vivid. 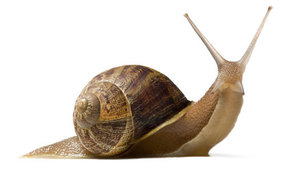 Presumably attracted by the prospect of lunch, snails had made their way from the gutter via the offending warning pipe into the cistern where they could be seen brazenly devouring detritus.

Having been issued with a lengthy enforcement notice, the farm owner acted swiftly. The storage cistern was isolated immediately, double check valves were installed and the cistern and troughs were condemned. As for the gluttonous gastropods, they were given their sliding orders.