Non-return valve is a term commonly used in industry and easily understood by the public.  Simply put it describes devices trying to stop fluids returning back. Since industrialisation engineers soon realised the need to stop fluids flowing backwards, either to aid processes or to prevent damage. They soon came up with ingenious designs to stop this, giving them a variety of different names amongst them non-return valves (NRVs) and check valves (CVs).

It is only in the 70's that there was a change in the meanings for both of these terms particularly when talking about water supply systems. This happened after a report*  was published in the mid 1970’s which recognised a more robust approach was required to protect drinking water supplies from contamination. Separate standards were drawn specifically for water supply systems in the early 1980's, which defined higher performance requirements for these new protection devices – now referred to as check valves.

So, when reference is made to the Water Fittings Regulations (Byelaws in Scotland) and backflow protection it is easy to understand why lay people could mistakenly think of non-return valves.

So what is the difference?

A quick search of the internet will show that in 1907 Frank P Cotter is credited as to creating the first simple self-seating check valve that could be readily opened for inspection and repair.  His design ensured that the check valve element would remain reliable when subjected to vibration and transitional stresses – something that is a fundamental requirement in modern backflow prevention devices within drinking water systems. 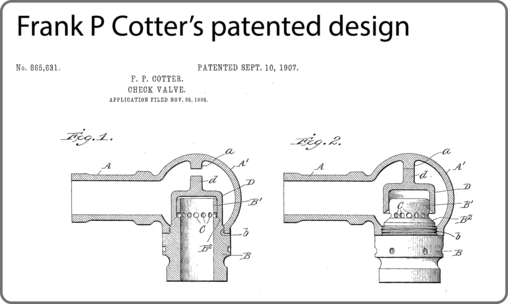 Non-return valves are used in systems where it is desirable to make sure fluids flow mostly in one direction, but may not be critical, for example in pumped systems such as heating circuits.

In terms of water fittings, performance testing carried out on NRVs is principally to make sure fluids predominantly do not flow backwards – as you might expect – and to make sure the fitting is water tight and does not leak. It does not usually extend to long term durability of the non-return function; suitability for drinking water applications; or that it will operate properly when the valve is put under strain; all of which are required for check valves.

Over the years the fundamental principle has remained the same for non-return and check valves with the moving element coming in many forms, from moving flaps to sprung loaded balls or discs. As plastics materials performance have developed it is more common to find in drinking water devices the check valve element shaped like a plastic mushroom. This helps it resist the 16 bar back pressure that it is subjected to in testing.

For backflow prevention purposes, amongst the tests check valves must endure is 80,000 opening and closing cycles (sizes up to 50mm) to ensure it will operate as intended over its lifetime. Afterwards it will then be checked to ensure that the check valve element’s functions correctly at very low differential pressures. This makes sure that the check valve will close and seal tight when there is no fluid movement. The seals within the check valve have to remain permanently elastic and firmly secured to ensure they resist being dislodged, thereby making sure potential contaminants cannot return back to the upstream wholesome water system.